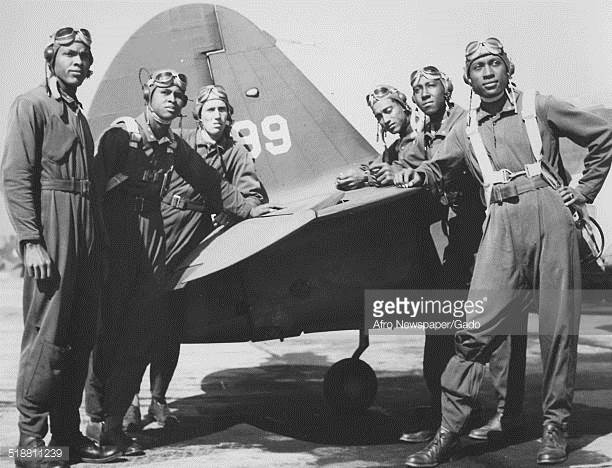 The Tuskegee Airmen are the first group of all Black Americans that served in the military during  World War II. These men were constantly subjected to racial discrimination both at home and abroad. Despite this, however, the 996 pilots as well as over fifteen thousand ground fighters in the units hold and were credited with around 15,500 attacks and earned well over 150 Distinguished Flying Crosses for their plethora of achievements, according to the History Network. Because these successes were highly publicized during and after the war, the Tuskegee Airmen acted as a gateway to the eventual integration of races in the U.S. armed forces in 1948 under President Harry Truman.

The name “Tuskegee Airmen” is derived from the “Tuskegee Experience.” According to Tuskegee Airmen Inc.,all of those involved were a part of the Army Air Corps program meant to train African-Americans to fly combat aircrafts. The members in the units were educated as pilots, navigators, maintenance and support staff, bombardiers, instructors, as well as all of the personnel who were in charge of making sure that the planes and their pilots remained in the air.

The military chose the Tuskegee Institute to train their pilots because of how committed they were to aeronautical training, according to Tuskegee Airmen Inc. Tuskegee had the resources required for this plan: the facilities, technical and engineering instructors, and even a stable climate that was fit enough for year-round flight training. After the training was complete in May of 1940, the Tuskegee program was expanded and became a major part of WWII.

“Honestly, this surprised me on how we never really learned about it,” states Connor Worley (11) after learning about the Tuskegee forces. “Especially with the major role that these men played.”

There was also a movie, as well as a documentary, made to show people what it was like for these men to fight in the war separate from the other white soldiers. Release in 1995, the movie, titled The Tuskegee Airmen, was directed by Robert Markowitz. The documentary was titled also titled The Tuskegee Airmen and directed by both W. Drew Perkins and Bill Reifenberger, who released the film seven years later in 2002, according to IMDb. It was filmed at Moton Field in Tuskegee Alabama, which was where the airmen of the 99th Fighter Squadron called home.

Though these brave men are still unknown to some individuals, they are all proud to say that they were a part of a group that was able to defend their country.