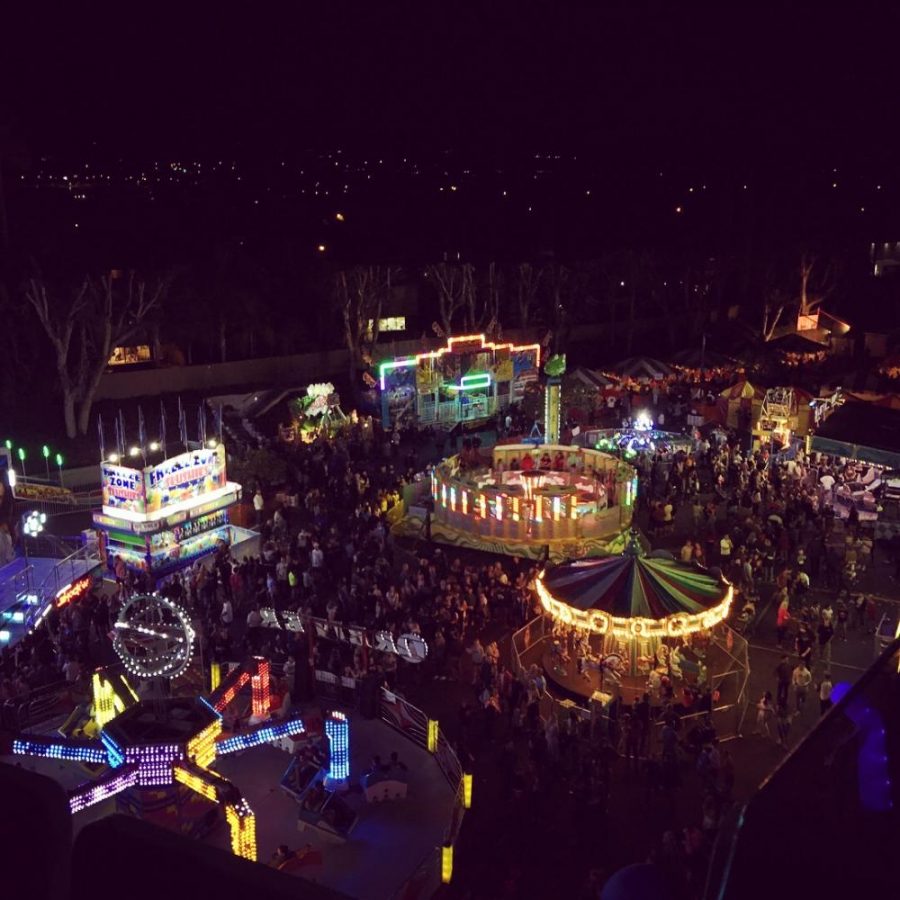 This is the top of the ferris wheel looking over all of the festival on its busiest night during its most popular time.

From Friday, September 23 to Sunday, September 25, Oktoberfest was held at St. Martin de Porres Catholic Church. This year was the 38th year for the annual festival and it was one of its biggest years too. Several students from different high schools went, along with various families and relatives.

There were also games all over the festival; some including, Soda Pop Toss and Ping Pong Toss where people would all crowd around tents to see families and friends play these games causing many people to have, “…had a great experience at Oktoberfest! [Loving] hanging out with friends and winning a whole bunch of prizes” as stated by Rachel Verpooten (10). A number of attendees also increased the later in the night it got, though the festival ran from at least 2-11 on all three days. Red and white striped tents had been pitched all through half the location for Oktoberfest where not only adults but also teenagers and kids would help volunteer at these booths.

The food had quite a lot of variety as well due to the fact that they all had been from different cultures and areas in the world. It ranged from Italian to Filipino to American all in one area. The foods could be smelled throughout the entire Church as well as the smell of cotton candy and funnel cake. As well as the baked goods they had been selling for the attendees, the rest of the foods had been well priced with an average of about $5 per food.

One of the overall favorite parts of Oktoberfest is the rides where everyone is screaming so loudly you can hear it before you even reach the parking lots. This year there were several rides that had been newly put, but also those that had made a comeback from last year like, The Zipper, Orbit, and the ferris wheel. On average tickets per each ride had been somewhere between five to nine per rider, similar to game tickets.

Around eight o’clock is when most people had shown up and the night would truly begin with rides buzzing and food being eaten as well as people playing games. Saturday had been the busiest day, with Friday being a close second. There were definitely more students from the local high schools on Saturday, most likely due to the football game on Friday and homecoming the night before the festival.

This year at Oktoberfest included several rides and games for children and adults of all ages, making this year one of the most successful festivals at the St. Martin de Porres Catholic Church had seen in a while with help from the various volunteers and helpers.