Behind The Friday Night Lights 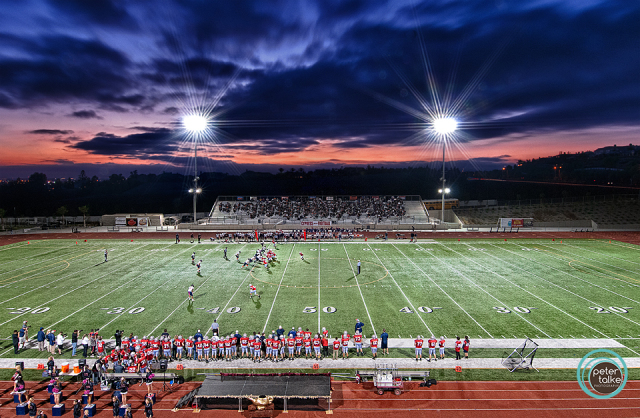 The sunsets beautifully behind Shapell Stadium.

Every Friday across the country high school students flood into their high school’s football stadiums. Whether they are on the field, in the stands, or on the sidelines, they are all there for the same reason, to support the football team. At Yorba Linda High School our football team is facing some major changes. Last year football had a spectacular season and ended up winning CIF for Division Eight. They were also one game away from going to state, which is the furthest the team has gotten in our school’s history. At every game, home or away, our student body is there to support our players out on the field. From the students on the field, to the students in the stands, to band and color guard at halftime, to the cheer and song leaders cheering on the sidelines, all Yorba Linda football games bleed navy, crimson, silver pride.

In 2016, Yorba Linda football achieved their goals by winning the CIF Division Eight title. This year, due to that extraordinary win, they have moved from Division Eight to Division Seven. Not only will this cause an “improvement in competition when playoff [season] comes around,” but it will also create a more challenging environment for the team to work in according to Luke Wilson (12). Yet, with challenges come failure, and with failure comes hard work to overcome that failure to strive for success. Winning never comes easy, and as their competition gets increasingly more difficult, the only way to reach success is through hard work and dedication. Two qualities the Yorba Linda football team does a terrific job at portraying.

By changing CIF divisions, many assume the team will also have to adjust the way they play or their strategy, yet this is not the case. Despite the increased difficulty of competition, nothing is changing from last season to this one. The team simply wishes to “[stay] focused on winning each game week by week” by focusing on their own quality of playing, rather than that of their competitors says Luke Wilson (12).

With five games let in their pre-playoff season, three of those being home games, make sure you all make the effort to come out and support our Mustang football players on this year’s journey to playoffs. Despite the increased difficulty of the competition, there is nothing our football team cannot accomplish with the support and love of the student body everywhere they go.