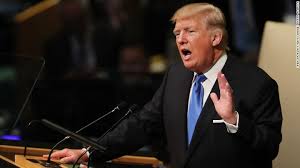 Trump gave a speech regarding the looming threats of the world during the United Nations General Assembly on Monday, September 18. In his speech, Trump addressed several topics such as the stock market, the recent hurricanes that struck the south-east, crime networks, and terrorist groups. The speech itself went on for a little over forty minutes and was focused on his railing about countries that are seen as threats or possible threats to America. The main countries in question are both North Korea as well as Iran, as stated by The Guardian.

One thing that made a long lasting impression, however, was that he vowed to destroy North Korea. Given, of course, that they were to once again threaten America and its allies with their development of powerful missiles and nuclear weapons. This action is not surprising, especially considering North Korea’s most recent nuclear test over the Japanese city of Hokkaido. Furthermore, it is no secret that North Korea has had its eye on America for a long time, and Trump has finally decided to put his foot down on the issue and will tolerate their hostility no more. He reassures the audiences by stating that he “will always put America first” and believes that other countries should do the same with their people.

While the majority of the speech came off to many people as Trump showing initiative for his position for the country, several others look back at his words with disdain. According to the LA Times, the speech was “needlessly offensive” and had unnecessary criticisms of both countries. According to the LA Times, many believed that his criticisms were overly biased and unjustified, especially so with Trump’s view on the North Korean issue because it “was not revealed with more caution.”

“Everything is white noise at this point,” states Paige Richey (11) after hearing Trump’s threat. “I still care about this stuff, but it seems that new threats and major things happen all the time now. Overall, North Korea is a threat and I am against it; I just fear any consequences of that.”

Unfortunately, North Korea was not pleased to hear Trump’s words meant to uplift the people of America; to the contrary, he went as far as to interpret the speech as a declaration of war. After North Korean Foreign Minister, Ri Yong Ho, revealed this to reporters in New York, America did what it could to assure them otherwise. Later, CBS News reveals that press secretary Sarah Huckabee Sanders told the reporters that Trump’s word should in no way be taken as a war declaration and that “the suggestion of that is absurd.”

Just to be safe, however, Trump sent U.S. Bomber Planes along the coast of North Korea as a show of force to ensure that war does not actually commence. All of the aircrafts stayed 200-miles off of the coast, which is out of North Korea’s anti-aircraft missiles. According to CBS News, this means that North Korea ends up with a severe disadvantage to America.