How Do Today’s Disasters Affect You? 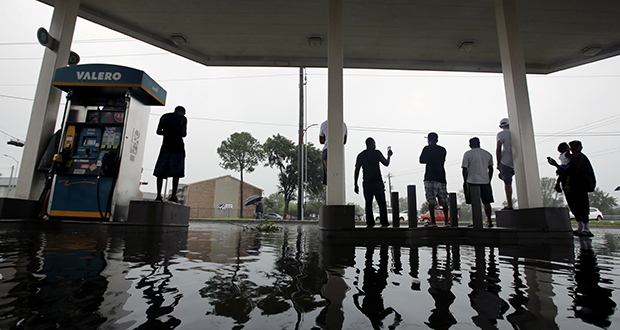 Citizens of Texas attempt to get gas during Hurricane Harvey, but face struggles due to the extreme gas shortages.

In the past month, an astounding amount of natural disasters have occurred around the world. In the United States alone, two major hurricanes have struck Texas and Florida. Hurricane Harvey in Texas and Hurricane Irma in Florida were both devastating to their communities in many ways—one of those ways being economical. Yet, for those who do not live in one of these affected areas, people may begin to wonder how it is that they are affected by these events. Many people, such as Joanne Sumarsono (11), believe that although it is a true tragedy, it doesn’t really personally touch the lives of people in unaffected areas of the country. Little do they know, they too will be heavily affected by economic disasters.

Throughout America, citizens stop throughout the day to fill their cars with gas. Across the United States, the surge in use of gas is causing prices to rise as well. The prices have had an increase of twenty-five cents in just a week, “the biggest gain since 2005, when Hurricane Katrina stomped through the Gulf Coast” (CNBC). Due to the fact that the rising gas demand in Texas is not directly affecting people in further points of the country, such as California or Oregon, people may not recognize the effects; the overall need for gas is increased, as well as the need for it to be transported and sold, and therefore, the price rises.

Along with the rise in gas costs, the cost of insurance will rise as well. Despite not “[living] in one of the areas hit by Hurricane Harvey and Irma,” your insurance rates are “not likely to go unscathed.” (usatoday.com). Many large insurance companies are national companies rather than local ones. To accommodate their clients who were affected by the disasters, these companies will likely have to raise their prices for all their customers just to stay afloat. The latest estimate projected that over seventy-five billion dollars would be owed to insurance claimers who were victims of Hurricane Irma alone.

On top of a rise in insurance rates, there is also a possibility of a rise in taxes. Of the almost two million homes affected in Texas, less than 20% had the flood insurance needed to repair their ruined homes. With more than forty billion dollars worth of property damage and a destroyed local economy, President Trump reached out to offer a helping hand. The Federal Emergency Management Agency, or FEMA, offered financial help. What does this mean for the rest of the country? Well, it leads to national tax dollars going into the pockets of the Hurricane victims. This extra need for tax money may also lead to the rise of taxes, due to the need to cover previous costs on top of this new demand for government funds.

All of these factors are major contributions to the national damage of the economy—an economy which includes all citizens of the United States on a national scale, and in a way, makes everyone a victim of these tragic disasters.