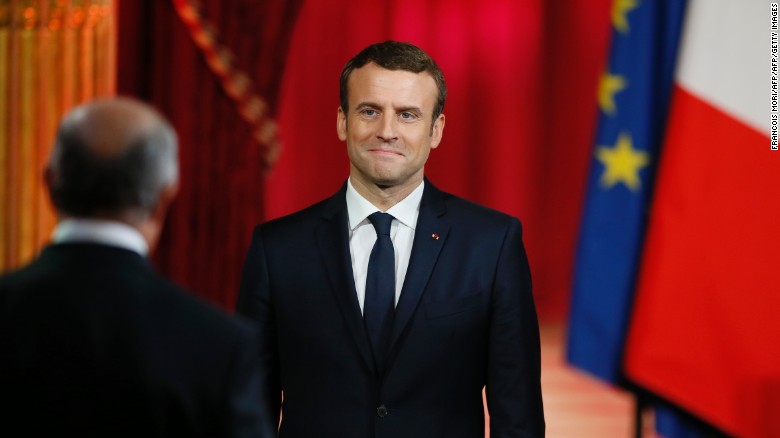 Emmanuel Macron is the newly elected president of France. Photo courtesy of CNN

As of Sunday, May 14, 2017, the youngest president of France, Emmanuel Macron, was elected, surprising many, and for good reason too. Macron is a liberal centrist who joined the presidential race without the support of an established political party, nor has he ever held an elected official position. Thus, many people assumed that he was too inexperienced to hold such a position such as being the president of France. In this election, Macron’s running opponent was Marine Le Pen. This election, which consisted of eleven running candidates, included Macron and Le Pen. Ultimately, Macron received  23.75% of the votes, whereas Le Pen received 21.53% of the votes. This election was particularly significant, since Macron and Le Pen defeated the other running Socialists and centre-right opposition Republicans, as these parties have been highly influential on the French politics for years. Macron had a non-party political movement called En Marche, translated “On the Move,” and is neither left nor right.

Now, who is Emmanuel Macron? Well, this 39 year old president was totally unknown to the public just three years ago, and he has never participated in other elections previous to his most recent election into office. In fact, he was previously an

investment banker, working as an economic advisor to the Socialist president Francois Hollande before he became the economy minister in 2014. Macron was born in Amiens, France to a family of doctors. His personal life has also generated much attention, for as a teenager, he and his drama teacher, 25 years his senior, were in a relationship. He and his teacher met when he was 15 years old and she was 40 years old. Not only that, but she was also married with three children. It has not been revealed when exactly the relationship between the two became romantic. In hopes of discouraging the relationship, his parents sent him away to Paris in order to earn a better education; yet, he was determined to return to Paris in the future to marry this woman, and he ultimately upheld this promise to himself. In 2007, he married his previous teacher and now wife (Bridgette Trogneux), proving to himself and others that he truly loved Trogneux.

Macron defines himself as “neither of the Left or the Right” but “for France.” He is very much on the Left in terms of social aspects, such as the freedom to be able to practice one’s own religion, equality, and immigration. He has pledged to fix France’s welfare and pensions system. For instance, he aims to improve unemployment benefits, and he wants to be more lenient on the retirement age, which is currently set at age 60. He is an adamant supporter for defense against terror; as a result, he has proposed more spending for defense, hiring 10,000 additional police officers, and forming a task force to constantly work to fight ISIS. He also supports equipping teachers who work in poor, diverse locations with better salaries. He was able to achieve a lot of popularity with his pledge to bring more jobs to poorer areas of France. Furthermore, Macron has stated that he wants to encourage British businesses and banks to relocate to Paris, as he aims to reduce corporation tax significantly. Throughout the process, Macron’s policies enabled him to attract many first-time voters to vote for him.

Thus, Emmanuel Macron, the youngest president ever to be elected in France, is expected to accomplish great things, as his policies have generated many supporters and he has already had much success in inspiring people with his visions for a newer and better France.