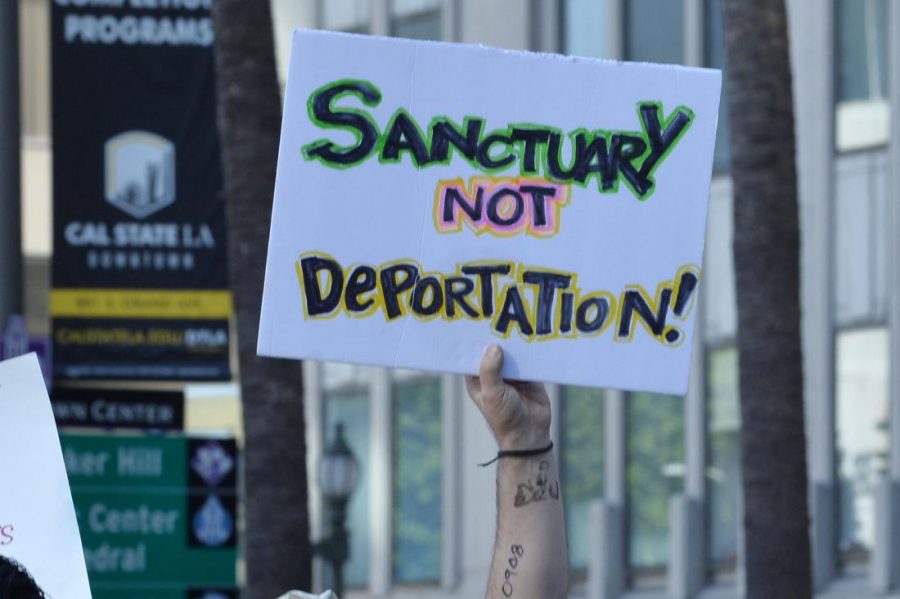 A sign in favor of sanctuary cities, Photo Courtesy of CNN

President Donald Trump’s infamous immigration laws have been met with considerable resistance in numerous forms. But one particularly strong barrier has been the existence of sanctuary cities, known as any city or county that is resisting the laws in any way. Recently, however, sanctuary cities have found themselves in a dangerous position as the government does everything to try and stop them.

First looking deeper into exactly what sanctuary jurisdictions are, these counties or cities primarily work by refusing to imprison people for longer than 48 hours because of their immigration statuses. The process involves first the identification of an immigrant as being undocumented, and then the Immigration and Customs Enforcement (ICE) asking counties to hold the immigrant for over 48 hours, as they are unable to keep them in for any longer otherwise. Thus, the counties have the choice of either refusing and letting the undocumented immigrants go free or keeping them behind bars to be deported. Most of these sanctuaries are in major cities, notably, New York, Miami, Chicago, Los Angeles, Seattle, Las Vegas, and San Francisco.

When President Donald Trump first took office, he issued a press release on his fifth day of office, January 25, 2017, that intended to stop sanctuary cities. But on April 26, 2017, a District Judge William H. Orrick managed to overrule the order through a number of lawsuits that challenged the order. These lawsuits did succeed, proving that the original order itself was illegal ( The Washington Post ).

But now the government has finally found a way to target the sanctuary cities, which is by threatening to cut off grants. Fox News explains how “any city or county applying for a Department of Justice (DOJ) grant requires the applicant to certify compliance with all federal laws”, meaning that sanctuary cities or jurisdictions will not be eligible. This new rule has been imposed by Attorney General Jeff Session through Section 1373.

Fox News also details what Section 1373 is and how it states that cities or counties “may not prohibit, or in any way restrict, any government entity or official from sending to, or receiving from, [federal immigration officers] information regarding the citizenship or immigration status, lawful or unlawful, of any individual.” In simpler terms, sanctuary cities that previously were able to get away with assisting illegal immigrants will now be cut off from certain government funding programs if they continue to fail to comply with the immigration laws.
The future is dark for the many influential sanctuary cities, as the country struggles to decide which side is truly worth believing in. Technicalities, politics, and legal issues are all grappling with each other as the continuing controversy of undocumented immigrants sweeps the nation. But as Sarah Chen (9) points out,
“the best thing we can do right now is to stay informed and stand up for what we believe in.”