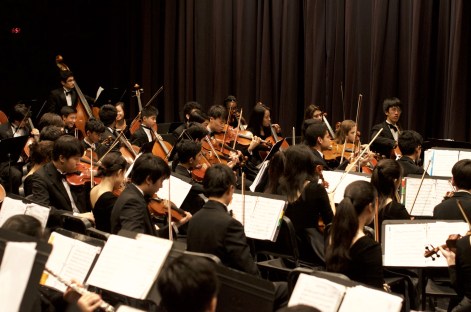 This is an orchestra setup very similar to the YLHS orchestra’s at the Valencia concert a few nights ago.

On Wednesday May 9, the Yorba Linda High School Orchestra had their second to last concert of the year at Valencia High School along with various other string orchestras. They played two pieces as well as the “Star Spangled Banner” at the introduction to the concert. Under the direction of Mr. Mortensen, they had quite a successful concert. They had started out by executing their tone and rhythm as they had wished to.

They then moved on to their second piece, which was titled “March”. Many parents, as well as the students, believe that this was their best piece of the night. Their articulation throughout the song was the best they had ever played, as were their dynamics. However during some areas they had been rushing, they still managed to pull it back and take the speed given to them by Mr. Mortensen. The beginning of the song had started out strong, both with tone as well as rhythm and towards the middle the rhythm and dynamics of the piece were truly played out however the tone did waver a bit. Towards the end of the song they really put their all into their dynamics and finished the song strong. The sound they achieved mixed into a symphony of sound that reached to every corner of the gym, which could only be done if the entire group had worked together and were on time with one another because, as Dylan Aoyagi (9) states, “Music consists of many layers and each person helps stack them together to make the reward greater than anything one individual.”

After switching out with Esperanza and waiting till the very end of the concert, the Yorba Linda High School String Orchestra had to play their final piece titled “Wicked” from the famous musical, since it had been a mash up of several songs from said musical. Starting with the opening of the musical and moving on to “Defying Gravity” from there, it truly was a challenging piece. The beginning of the piece is quite intense with various high notes mixing with loud lower string notes as well as several divided notes within sections to help the audience feel the full out sound being conveyed through the composed song through these instruments. Finding a blend of tone and rhythm through string instruments can be tricky with the intonation being hard to place as well as the bowing itself sometimes requiring its own attention due to its intricacy. Justin Lopez (9) believes, “It’s not easy to just for a group of people to come together. It takes a common goal. They have to be dedicated and willing to work to produce the best result possible,” which translates to orchestra and how often these students practice to achieve the result they would like.

After the conclusion of the concert, the entire string orchestra had taken a bow since they had been the last ones to perform, and the night came to a close after several other orchestras before them had performed. Their annual concert at Valencia is now completed and they shall move on to their final concert of the year at the Yorba Linda High School forum on June 6 to finalize their year.