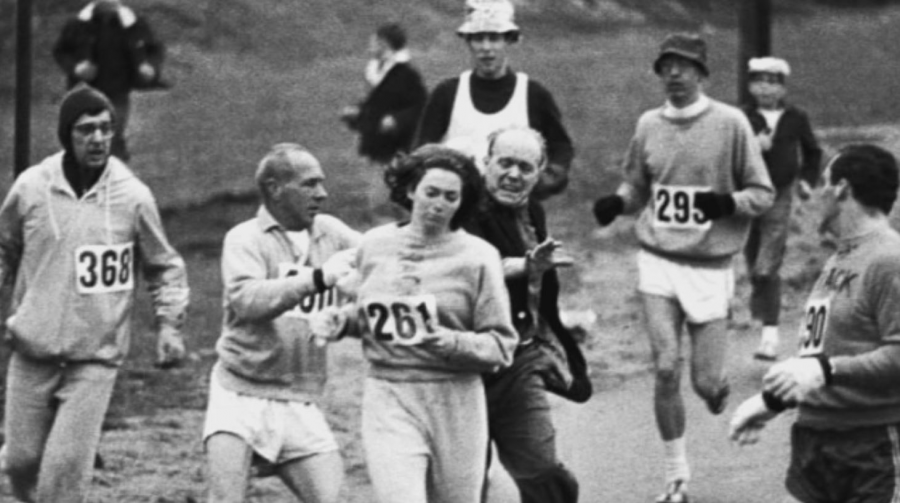 Kathrine Switzer was the first woman to participate in the Boston Marathon in 1967. Photo courtesy of Fox News

Number 261. To many, 261 is merely a number. To Kathrine Switzer, however, 261 is a reflection on a victorious day, 46 years ago. In the year 1967, at just 20 years old, Kathrine Switzer became the first woman participant of the Boston Marathon. Since no woman had ever run in the Boston Marathon at the time, Switzer had registered under the name “K.V. Switzer,” in order to mask her gender from potential disqualification. Furthermore, she was able to run, undetected, for two miles of the race. However, once two miles passed by, a race official named Jock Semple recognized that one of the participants had been a woman. Horrified and angered, he chased Switzer, “threw [her] back and he said, ‘Get the hell out of my race and give me those numbers,’” according to Switzer.

Kathrine Switzer’s boyfriend was also present at the Boston Marathon, and he shoved Semple apart from Switzer, while she continued to run, as this was her only goal. The attack can be seen on an iconic photo, which displays the furious race official attempting to thwart Switzer’s attempts at participating in the race, while a few men run to help Switzer maintain her safety and her pace. This photo holds an underlying meaning and discrimination that many female athletes back then and still today dealt with.

Despite the hate from Semple and journalists who yelled obscenities towards her, Switzer remained unfazed, for she had finally reached the finish line.  Kathrine Switzer was not about to let her gender nor oppressors such as Jock Semple intervene in her aspirations to complete the Boston Marathon as participant #261.

Although today Switzer is regarded as an inspiration and role model to women and athletes everywhere, back then her decision to partake in this iconic race was met with great criticism, during and after the race. Once she had completed the race as participant #261, she subsequently was removed from the Athletic Federation, thereby prohibiting her from running. However, Switzer did not respond to this demand with regret nor did she respond with an apology. Instead, she began her own club and continued to run with the people who joined her club. Once the club began to grow, different events were planned and executed with success, so much so that Switzer even became sponsored.

Fast forward a few years later and Switzer had accomplished in growing her modest club into a support network for women to run with ease and freedom. She organized many races in 27 countries that involving millions of women. Grace Kim (10) says, “Her story is very inspirational to females all around the world.”

Today, Kathrine Switzer has run 39 marathons and is yet to be finished. On April 18, 2017, fifty years after the 1967 Boston Marathon that changed Switzer’s life, she finished her latest race, with the same number: number 261. As Switzer states, “My message to young girls is that you can do more than you can ever imagine. The only way you can imagine it is to do it. To take the first step. And if you take the first step, you can than take three steps. And than you can take 10. And someday maybe you can run a marathon. And if you can run a marathon, you can do anything.” Not only does this apply to sports, but Kathrine Switzer has proven that women anywhere are capable of accomplishing anything that they set their minds to, as no task is impossible without first pushing oneself to taking the essential baby steps to success.