Achieving World Peace with a Soda? 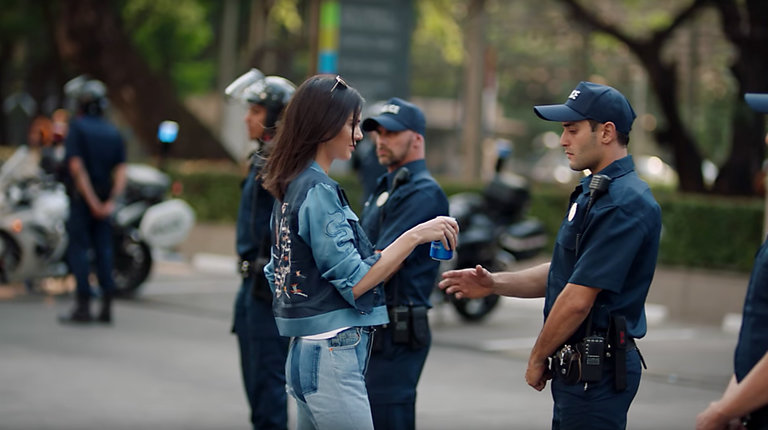 Kendall Jenner hands a police officer a Pepsi, easing the tension between the protesters and the law.

The new Pepsi commercial has sparked major outrage on social media due to its controversial way of depicting a sensitive social topic. In the 2-minute-39-second “short film,” Kendall Jenner, a very popular model in the United States, is pictured at a photo-shoot on the streets, where there also happens to be a protest going on. She takes off her blonde wig, supposedly symbolizing her freeing herself from the harsh modeling industry, to join the protest. She then walks to the front lines, takes a soda, and offers it to a police officer. He takes it, drinks it, and smile. Everyone cheers, and world peace is achieved.  The next scene shows Kendall leading a diverse crowd of people of color down the streets, and the ad ends with the Pepsi logo.

Pepsi made a huge mistake with this commercial, one of them being hiring Kendall as the lead. In the United States, she would be the epitome of the ideal woman. She is skinny, pretty, tall, which basically describes everyone in the entertainment industry and mainstream media. She is the opposite of diverse, which is ironic because the protesters in the video were minority groups who were fighting for the same rights someone like Kendall already has.

Also, this is very disrespectful to the people fighting for Black Lives Matter because a similar incident happened during a Baton Rouge protest against police brutality last July (Variety). Ieshia Evans, similar to Kendall, went to the front lines and stood in front of the police officers. However instead of offering a soda, she offered her hands for arrest. Evans did not get a happy ending like Kendall did in the ad, showing the unrealistic elements and racial bias in it.

Ashley Bui-Tran (10) is also disappointed and bothered by this ad. “I think this was a very bad attempt to portray real world problems because it undermines the fundamental ideas of Black Lives Matter and other movements by saying that all problems can be solved with a soda,” she says. “It was also a bad idea to cast a skinny, white model as the ‘hero’ of the film because it further implements the idea that people of color need to rely on the privilege of white people to help them.”

The official ad has been deleted from Pepsi’s youtube page, but other accounts have reuploaded it so people can still watch it.