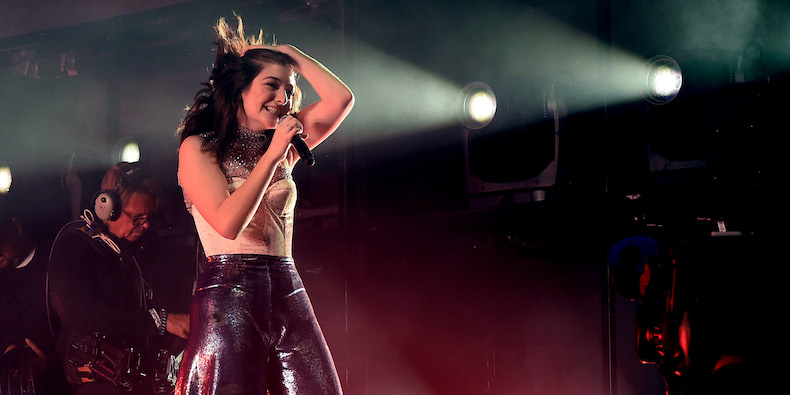 Lorde performing on the Coachella stage in Indio.

One performer in particular has turned away from the public eye for 2½ years and made her comeback performance at Coachella on both Sunday’s of the event. Lorde, the alternative-pop singer surprised the audience when she made her appearance in Indio for the Coachella Music Festival. She performed a 12-song set which lasted for an hour. In her set, she sang her new single, “Homemade Dynamite”. Aside from her new hits, Lorde sang “Royals”and other throwback songs with her fans. Most of the audience was captivated by Lorde’s performance and thought it was a breathe of fresh air and very entertaining.

Prior to her comeback, Lorde is best known for hits such as “Royals”, “Team”, “Tennis Court”, and “Glory and Gore”. After taking a short break, Lorde had been writing new songs and working really hard to make her second album, “Melodrama”, a success. Lorde’s new album,“Melodrama”, is due for June 16 and is one of the “most highly anticipated sophomore records in recent memory” according to The Wall Street Journal. “Melodrama” is mostly about the ups and downs of being a young adult.

Coming back into the limelight, Lorde still remains grounded. Her morals are more important to her than all the fame in the world. Lorde has credited staying humble to her mom who often travels with her. Although very talented and an ecstatic performer, Lorde stays true to her roots mostly focusing on minimalistic ideals.
In the end, the “Royals” singer made an astounding comeback at the Coachella Music Festival 2017. When asked what she thought about Lorde’s comeback, Sarah Frazier (9), commented, “I am glad that Lorde is back because she is so talented and I love her music.” With “Melodrama” releasing soon, make sure to stay tuned for more music by Lorde.