Every 15 Minutes Lasts a Lifetime

The Sobering Reality of Drinking and Driving 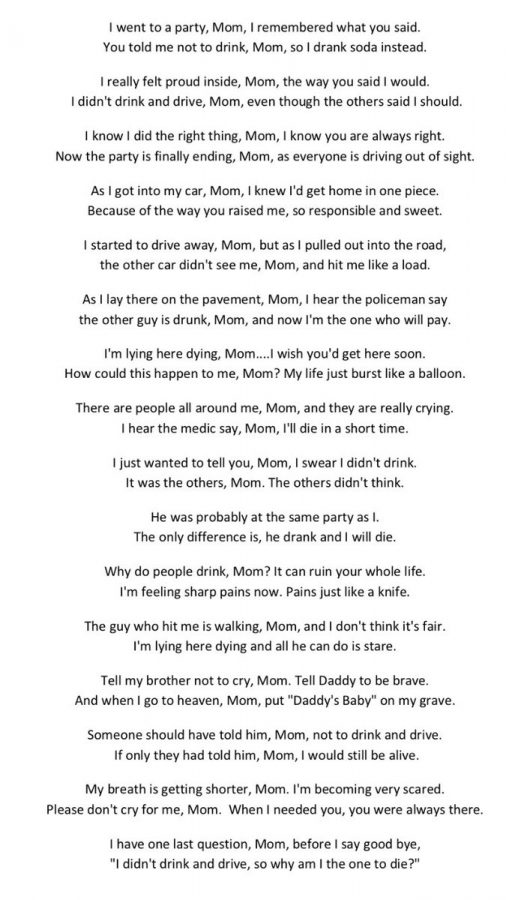 Every 15 minutes, someone dies in an alcohol-related collision.


As teenagers, we are inclined to want to try new things; some of us want to fit in; some of us want to rebel against society, norms, and the law. Many of us crumble to peer pressure and it is not uncommon for high school students to drink and abuse drugs. We don’t think about the what-ifs or the consequences. We use “living in the moment” or “you only live once” as a justification for many of the decisions we make in our teenage years.

It is the day that something bad happens when you finally realize that you made a poor choice and the sobering reality will change your life completely. There may be a day where you may get into a collision because you decided to drive even though you were drunk. There may be a day where it could be the other way around and a drunk driver crashes into you. You might injure or kill someone, you might injure and kill yourself, or someone could injure and kill you. The impact of alcohol-related collisions not only have an effect on you and your family and friends, but also on the entire community. Just because you have never known someone involved in a collision or think it is not common does not mean it will never happen.

There is the fear of dying with words left unsaid, without accomplishing your dreams. The emotional trauma that your parents have to go through if they have to bury their child. A father never getting to walk his daughter down the aisle, siblings no longer having someone to look up to, a mother who will never recover from losing her child. The guilt that will consume you if you are the cause of someone’s death is going to affect you for the rest of your life. No matter how much you have had to drink, do not drive afterward. Call someone, a friend or a parent, anyone who is sober, to drive you home. It is better to have angry parents than to harm someone or harm yourself due to the poor choices you made.

Many high schools participate in the Every 15 Minutes Program every other year to send the message to students that drinking and driving has many negative effects that last a lifetime. On April 4 and April 5, Yorba Linda High School participated in the program.

Throughout the day, the grim reaper came by to remove a student from class, and a police officer came to lay a rose on the students’ desks and read the students’ obituaries every 15 minutes. Officers also notified parents of the students either at home or work that their child was involved in an alcohol-related accident. Twenty-nine students and two teachers were a part of this simulation.

During third period, juniors and seniors made their way down to the parking lot of Bastanchury Road to view a simulated collision that would allow students to experience the involvement in an alcohol-related car accident. Local emergency services and the CHP assisted in the crash. The student “drunk driver” was arrested and booked for drunk driving, and all participants made an actual trip to the morgue, the hospital emergency room, and to the police department jail. They spent the night in a local hotel and were not allowed to communicate with anyone in order to simulate what it is like to be separated from friends and family.

Each student was asked to write a letter to their family that would essentially be their “last words” or what they never had the chance to say. Friends wrote letters to the students who were impacted, and parents were also asked to write letters to their children. These letters were later shared at the funeral assembly on Wednesday. An officer guided students, staff, and parents through the devastating effects of losing a loved one due to a bad choice. Guest speaker Scott William Johnson shared his story of how he made the decision of drinking and driving and ended up killing two women. One of them was eight months pregnant and the baby also died upon impact. Johnson’s leg was amputated and he spent 13 years in jail.

The assembly stressed that the decision to drink and drive can be harmful and will have long-term if not life-long impacts. The program is not meant to preach to teenagers that they shouldn’t drink. It is only meant to teach that you should never drink and drive. No matter how much you drink or how much you believe that alcohol does not affect you, it does. It is mind-altering and leads to bad judgment. Please do not drink and drive. Make good decisions. Don’t ever ignore the possibility of negative consequences.