Hit Show SNL to be Aired In the Summer 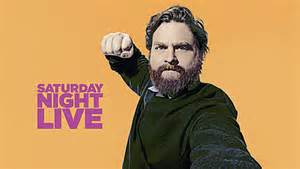 Above, Zach Galifianakis poses for the cover of a live SNL skit set to take place on the next saturday night edition.

For over forty two years, the hit show SNL has attracted much attention through its non stop laughter comedy reenactments. However, for the first time ever the saturday night attraction is going to be airing its hilarious skits during summer. According to CNN, the new idea is known as the “SNL Weekend Update” and will start airing on August 10. Although there is already a “Weekend Update” hosted by Colin Jost and Michael Che, NBC network stated, “the new summer edition will still contain these hosts and many more SNL favorites.”

With the vast amount of success the show has been receiving, the network believes it is a “no brainer” to continue airing during the summer season. According to an interview with CNN, “The show ‘SNL’ is averaging eleven million viewers who watch live or within a week of the broadcast.” This rapid increase in viewers has not only urged the act of a summer season, but also produced a wider variety of viewers and fans through recent skits. Through it’s comical and witty portrayal of our recent elected President, Donald Trump, the show has become one of the most talked about and watched television series currently aired on the vast world of television. Mrs. Pilkenton, one of Yorba Linda High School’s most esteemed teachers, stated, “During the school year my bedtime is 8:00, but during the summer there is no bedtime.” Thus, with the airing of the show during the summer season, Mrs. Pilkenton, like many others, will be able to experience the same amount of fun all year round.

According to Robert Greenblatt, chairman of NBC, “‘SNL’ is having the best season in a quarter of a century” and “we didn’t want them to take the summer off.” With the continuous airing of this hit show, the shows viewer rating is projected to go up more than twenty six percent over the summer. This would make SNL one of the top watched series to ever air on the NBC network.

With the ever growing increase of SNL, students like Kevin Arambula (10), will be “able to focus on school during the school year, and have more time in the summer to watch all the new episodes and episodes that I missed.” Furthermore, fall and spring seasons viewers will no longer will have to wait till midnight to watch the summer edition of SNL. This is due to the recent announcement that the broadcasts will begin at 9:00 P.M. on primetime. According to USA today, the change from midnight to primetime on the summer edition, is due to the process in which the network is experimenting with to attract more and more viewers each week.

Although the recent venture into summer broadcasts has yet to be tested among the network, the jump into summer episodes is predicted to leap SNL into the biggest live talk show on TV today. Logan Langseth (10) is among the many who “no longer have to wait to watch these amazing skits.”