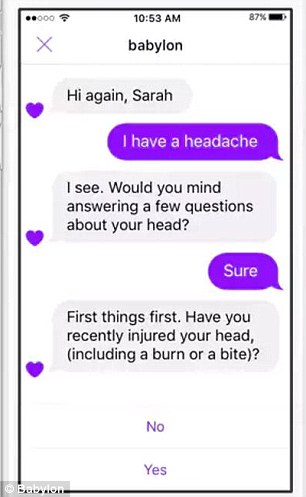 This will work just like any other messaging app.

This doctor app dilemma may be the beginning of a new era, an era in which robots seize current workers’ jobs. Visiting a doctor every once in awhile is now “so last year.” People will be able to get their diagnosis through text soon and it is quite shocking. There is an app that will be released soon which will essentially become more accurate and quicker at giving a diagnosis than a doctor. This specific software focuses on deciding whether or not a patient needs urgent medical attention (Daily Mail).

This special program is developed by Babylon Health and they are hoping to achieve more improvements in their works in order to make their concept worldwide. The app’s founder admits that the system focuses on treating diseases rather than just identifying what the disease is from the symptoms.

What is this app supposed to be like? Well, this app helps as if just texting a friend. Developers reassured, saying it would take “just 90 seconds to make a diagnosis, compared to ten minutes over the telephone” (Daily Mail). This seems quite convincing and fairly convenient. People are sometimes unable to hop in the car to personally see their doctor for a diagnosis, as they may be a great distance from their nearest hospital or clinic. As well, it is convenient for people who have problems or anxiety when talking to people, for example, talking to the doctor through the telephone. Brenda Perez (10) inputs her own opinion and adds, “the idea of this app seems quite easy and useful. I think this may benefit many people.”

How does it work? In order to receive your diagnosis in just a quick amount of time, the person which suffers from their illness is asked to type in their symptoms and then the app will respond immediately. Additionally, the app will ask the person further questions and the person is also able to ask as many questions they need to. The app is helpful in aiding one in seeking problems that are incomprehensible.

Of course, there are people around who feel iffy about receiving their diagnosis and health treatment from a phone; yet, there has been controversy swirling around that people give no trust in robots. However, it is absolutely normal to not put one’s trust in machines to do work as opposed to a human with a working brain. There are many directions in which this accommodating app can go, but at this moment, the idea sounds simple and easy to work with. In the near future, it is hopeful that this app will soar and help people in need instead of failing them.