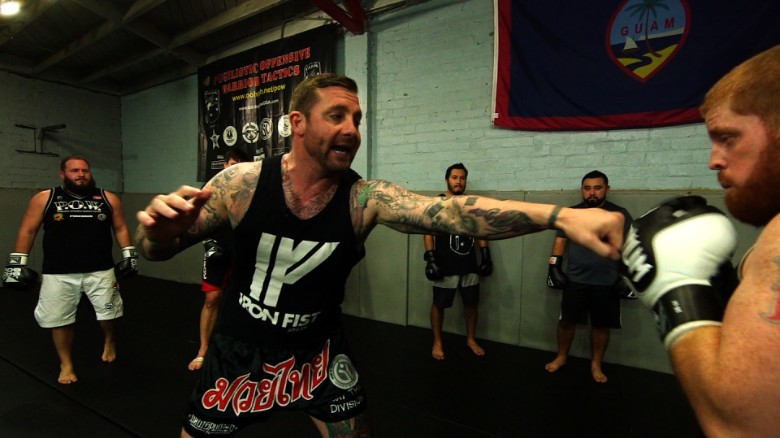 Above, Todd teaches a group of former combatants the proper technique of the perfect punch, and the right way to defend an attack.

With millions of American heroes returning home each and every day from their respective deployments, the question of what to do with their life suddenly starts to become a prominent life choice that all U.S. veterans must face. Todd Vance is a former U.S. army veteran who returned from more than two hundred and fifty combat missions all around Iraq and other neighboring countries. Already enlisted when the September 11 attacks occurred, he wanted to do more to help his country, so, according to CNN, he “enlisted for another three years.” Once back in San Diego in 2005, the “reality of what I had seen and done” started to become a heart wrenching topic in his life.

According to an interview with CNN, Todd quickly “turned into a recluse.” He began “drinking too much. Basically anything would either produce an extreme adrenaline rush or numb [his] adrenaline rush and the hyper vigilance and anxiety [he] was having.” This act is not uncommon among returning veterans; however, Todd needed a way to stop his unruly actions. Therefore, he started the Pugilistic Offensive Warrior Tactics program. This program, also known as P.O.W, received its name from the combat term prisoners of war. Vance decided on this name due to the fact that these veterans are “prisoners of their own war when they return from combat.” According to CNN, the program offers three free mixed martial arts classes per week at the Undisputed Gym in downtown San Diego. Although some may think the sport of mixed martial arts is contradictory to the problem that is trying to be solved, the classes are also disguised as group bonding. At the end of each class, Vance incorporates yoga in order to allow the veterans to leave the gym with a clean slate and pure state of mind.

The program has grown into something in which Vance could never see coming. In business for now over two years, Vance has seen an increase in participants and improvement in the dissolution of the horrific disease of PTSD. In an interview with CNN, Vance stated, “It is a great feeling knowing that you are helping others.” In accordance, one of the main team members, Joshua Tanida, has found a renewed purpose in his life through Vance’s program. He not only has gained “self esteem” but also “a whole different perspective on the person than [he] used to be and the person [he is] today.” This has all come through Vance’s program and his new way of treating PTSD.
Through the act of putting this program together and incorporating the love and friendship into each one of his participants, Vance has not only achieved his goal of helping others, but also helped himself. Sarah Heckel (11) further believes that “ not only is he providing a way to bring our american heroes together, but also allowing them to have fun and see their self worth through joining this program.” It is seen that the horrific effects PTSD has on our veterans is not yet seized; however, through programs and ideas like Todd Vance’s, each and every day we are getting closer to curing our American heroes for good.