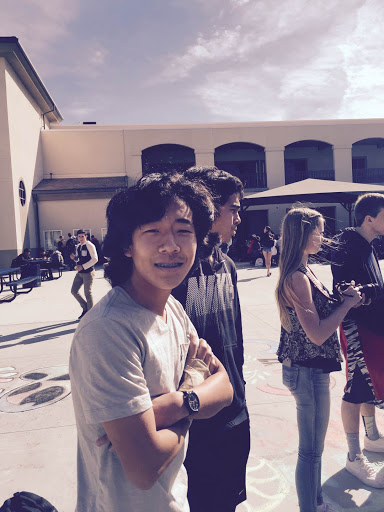 Blake Han is a sophomore destined for greatness.

Meet Blake Han, a current sophomore at YLHS.  Blake can easily be distinguished by his long, wavy, black hair that is his trademark, or his muscular forearms developed through arm wrestling.

Blake is one of the brightest students in the sophomore class.  He is a straight A student, and he is taking two AP classes this year which is rare for a sophomore.  Last semester, he excelled in both AP Euro and AP Chem, earning A’s in both classes along with his other three Honors classes.  When asked why he challenges himself with such difficult classes, Blake answered that he is “totally committed to victory” and he wants to “prepare [himself] for the future.”  He is looking to score well on both AP tests in a couple of months in order to earn a few college credits.

Along with his academic excellence, Blake is also involved in several extracurricular classes and activities.  He is one of the coaches of the nationally-ranked Science Olympiad team at Kraemer Middle School, and he participates in SciOly at YLHS as well.  An active participant in SciOly since 7th grade, Blake explains that his motivation to be so involved in Science Olympiad is that it allows him “to explore areas of science that [he] would not normally be able to explore in regular classes.”  In addition to SciOly, Blake is a member of our school’s Speech and Debate program.  He specializes in the Parliament impromptu debate event with his partner Ryan Lowery (10).  In their most recent tournament, they were one win away from qualifying for State Championships which is extremely impressive for first-year participants.

It might be hard to believe, but on top of all the academics and extracurriculars, Blake is a crucial member of the Mustang men’s varsity tennis team as well.  Blake has been on varsity since freshman year when the team got to the CIF semi-finals of Division III.  This year, Blake is partnered with David Johnson (12) on one of the starting doubles teams, playing for a tennis team that is one of the highest ranked in Division II.  Happy that he is a starter this year, Blake states, “After watching my team go to CIF semi-finals last year, I am excited that I can contribute to our team’s success this year and hope that we can go even farther.”
Blake Han is an all-around excellent example of a Mustang student.  He excels both in class and outside of the class, and he is bound for excellence in the future.