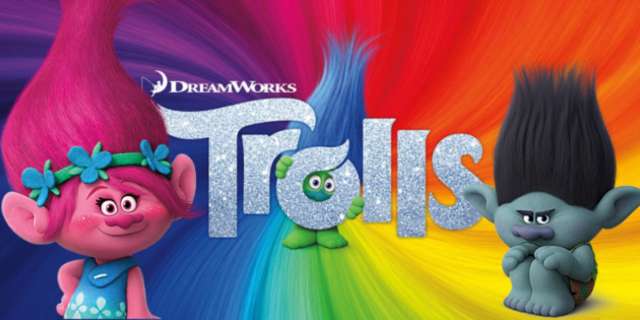 Trolls, the newest DreamWorks animated musical comedy hit theatres November 4, 2016 and has made over 300 million dollars worldwide. This film is full of sweet, feel-good, imaginative adventures and crazy upbeat music, dancing, and singing. Of course, this animated movie not only attracted young children, but also teens and adults like Devonna Qumsieh (11) who states “I think I enjoyed the movie more than my little cousin.” The whole idea came from the actual troll dolls made in the early 90’s, which were made into video games and video shows.

In the movie, the main characters are Branch(Justin Timberlake), Princess Poppy(Anna Kendrick), Biggie(James Corden), Creek(Russell Brand), and Dj Suki(Gwen Stefani). All of these characters are all tiny little creatures, trolls, who live in an endless state of dancing, laughing, and hugging continuously. Of course, all of this happiness is interrupted by their pesky neighbors, the Bergens, who are a tribe of giants that eat trolls because it gives them happiness. Yet, for two decades, the trolls are left untouched by them until Poppy, the happiest troll, decides to throw a rave with loud music and fireworks. This event draws much attention to the Bergens and they end up capturing a bunch of trolls for the Bergen Chief’s’ son to eat because he has never experienced happiness. So, Poppy ventures off in order to save her friends and is joined by Branch, a gray troll, who is a complete opposite troll of her. When they arrive to Bergen town, they find out their friends are being guarded by the scullery maid, Bridget. They decide to give her deal that if she lets them get their friends, they will giver her a date with the chief’s son. Eventually, everything goes right, she gets her date and they get their friends, but notice Creek, another troll, is still being held captive. Soon after, they discover Creek has lured the trolls to the Bergen Chief in order to save himself. Poppy begins to lose all hope and turns gray along with all the other trolls, but Branch starts to sing to Poppy that he loves her. She joins in, which ends up turning all the trolls, including Branch, back to their original bright colors. Afterwards, Poppy reveals to Bridget and the chief’s son that their date created happiness and that they didn’t need to eat trolls to feel it. When the chief’s wife sees this she attempts to kill all of the trolls, but Bridget throws her in a cart that’s on fire down a hill with Creek inside too and they both end up dying. At the end, the Bergens are all left happy and Poppy is crowned the new queen. This heartwarming animated movie is meant to teach that “happiness is life’s highest aspiration,” (tvovermind).